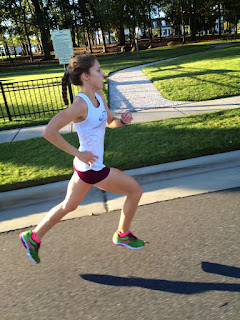 Today I want to introduce to you a type of workout aimed at improving your energy system efficiency. This is an enjoyable workout that, when incorporated into your program, can help you become a stronger and more successful marathon runner.  I call it the "brisk paced run".

Here is a chart of "brisk pace" for a neutral predisposition marathon runner of different marathon times.

Execution:  use the first 10 minutes of the run to warm-up and slowly ease into your brisk pace range, then hold the pace steady at brisk pace for the remainder of the run.  The focus of the run should be on running as relaxed and smooth as possible at this pace range. Rather than see how fast you can do the run, focus instead on how easy and relaxed and you can make this pace feel.

This should not be an overly fatiguing workout, but rather an invigorating run in which you finish pleasantly tired.  While it is recommended you follow this run with an easy/recovery run the following day, it is not meant to be an overly hard stress workout requiring significant recovery time.

Use:  This is a great workout to use periodically in your marathon training to help practice and improve your ability to run as relaxed and smooth as possible at a quicker pace.  Since it is not an overly hard workout it can often fit periodically into a runner's weekly schedule along with a quality workout and long run.

Benefits:  The main benefit of this run is increased energy usage efficiency, which is of great importance in the marathon.  In this run we run at or semi-close to marathon race pace with our primary focus on staying as smooth and relaxed as possible.  Learning to stay smooth and relaxed at a quicker pace will make us more efficient in our energy usage at that pace and similar paces (i.e. marathon race pace).  But while providing this benefit this workout is not overly taxing in itself and so can be regularly incorporated into a schedule along more taxing or intense workouts.

Fueling:  You can increase the usefulness of this workout as race day nears by practicing your planned marathon fueling (drinking and taking of gels) once or twice during the run. This will help you practice what you plan to do during the race and at a similar pace.  It is a great time to train the stomach as well as the legs. 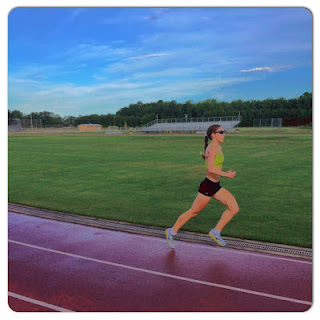 Far too many runners and coaches view the path to improvement (increase in fitness) as simply an increase in training volume.

Often this simple approach can work .... for a while.  But an increase in volume is not always the best and certainly not the only way to approach improvement.

Our bodies get fitter through the Stress and Recover Principle, which simply says that if we stress the body in a certain way and then allow it to recover, it will be better adapted to that stress (i.e. fitter).  An increase in training mileage is just 1 possible stress we can use.  But an increase in quality is also often a very effective method.  If we are doing 40 miles a week and it is all done at an "moderate" pace one training cycle, and then in the next cycle we start adding in a weekly quality workout (such as a tempo run or speed workout) each week into that 40 miles, we'll see improvement in our fitness and performances even without an increase in mileage.

The key to knowing which stress to add or increase is to understand the individual runner and their goal race distance and what is the limiting factor that is holding them back from running faster at that goal distance. This is where an experienced coach, with a firm understanding of the physiology of the sport, can be a huge asset to the runner.  They are in a position to objectively see what that limiting factor(s) is/are and focus on improvements there in your next training cycle.

As a coach who focuses primarily on the marathon and half marathon distances, many of the runners I work with will benefit most from an increase in volume, as endurance is a primary element of those 2 races.  But this isn't always the case.  Sometimes what the runner needs is to keep their volume the same and tweak or increase the quality components of their training.

This is now the case with one young emerging elite marathon runner I coach, Alana Hadley.  A couple of years ago, when Alana made the choice to pursue the marathon as her primary event focus, we tweaked her weekly training schedule to allow her to put more focus on building up her workout volume and mileage level to allow her to build the endurance needed to compete in the marathon distance at a national class level. Before this, she had been running 3 stress workouts per week (2 quality workouts and a long run) and in order to allow for more mileage and volume we adjusted that to 5 stress workouts every 2 weeks, 1 less stress workout per 14 days than before, which allowed her to more easily build her mileage level and workout volume to that of a elite marathoner.  This adjustment proved effective as she was able to increase her training mileage and move effectively to the marathon distance, running 2:41 in her first year (2013) and then 2:38 in her second year (2014) focused on the event including a big marathon win and getting a qualifying time for the U.S. Olympic Marathon Trials.

But now that her mileage level had grown to an elite level for her event (she runs 115-120 miles per week), we are looking elsewhere for future improvements ..... back to the quality components.  An increase in volume from here is likely to have significantly diminishing benefits, so we are instead adding a new stress by going back to the original 3 stress workout per 7 days micro-cycle, but at her new mileage level.  So after an initial focus on building volume we are now focused on the quality elements again.  This means that she once again is getting out on the track for a speed workout once a week in addition to her weekly tempo run and long run.  This change has only been in place for 6 weeks now but we are already seeing benefits from it with returning speed and improvements in most of her workout paces.

As a coach I had been under fire the last several years, by some critics, for my focus on building volume into Alana's schedule.  To me it made sense as she wanted to pursue the marathon as her primary event.  I found it very bizarre that often one looming question from critics was "if she is at a high mileage level now at a young age, how will she improve in the future, there is no where to go".  The answer was obvious to me, she'll continue to improve by a focusing on quality once her mileage is at the desired level.  Until then endurance was a bigger limiting factor in the marathon so volume was the first thing to work on.  To me the critics had fallen into the trap of looking at the path to improvement as only being one-dimensional.

I had a chance to discuss this with legendary Coach Renato Canova at a conference a couple of years ago.  He had noted some of the critics and their question and he suggested to me was to answer them with 1 simple word "quality".  His advice to me was to continue to slowly increase volume to roughly 200k per week (roughly where Alana is at now) then switch future improvement focus back to improvement/increases in quality.  Which is exactly what we have done, starting 6 weeks ago, with the switch back to the 3 stress workout per 7 day micro-cycle and weekly track workouts.

As you look to future improvements keep an open mind and look at the big picture.  What are your limiting factors and how can you best address them.  The answer may be an increase in volume ... or it could be an increase in quality.